"Journey of a lifetime"

It all started when Joanie, my friend with whom I started this adventure, told me she wanted to go to do volunteering work in Africa. I was sold the moment she told me but I still had to decide if I wanted to go with. We knew that Amber and Hilde had an amazing time in Africa with Thamsanqa and I knew a little bit about it because it was the charity for which we collected money during Christmas at my old high school. So, we emailed the organisation and when we got an email back we were more than welcome we were so thrilled!

After booking everything and collecting clothed from everywhere we knew, we were ready to go. I had never really been out of Europe so it was a big deal to fly all the way to South-Africa. So, the moment we arrived in Port Elizabeth I was a bit nervous. This ended being for nothing because we hadn’t even picked up our suitcases or we already saw Daphne waving at us. It was like we had been here before and are just coming back. With hugs and lots of love Daphne greeted us and we went outside to meet Peter at the car and again the most loving welcome I’ve ever had.

In de car ride Peter told the history and situation in PE and South-Africa even though I was tired I couldn’t stop listening. After a little tour of PE, we arrived at the house, it was so nice. I was certain this house would make us feel at home in the coming 3 weeks! The days following Sara, Jessie and Romée joined us on Sunday and on Monday Rosanne and Sebastiaan arrived by train. We all clicked well from the beginning. We went to the Church of Fathers House on Sunday evening with the 7 of us! It is an amazing experience when you’ve only know the catholic church ceremonies in The Netherlands. At Fathers house, it is just a big loving, excepting ceremony with a lot of songs and a lot of uplifting messages in his preach. Everyone was just having a great time with their faith.

Monday was the first time we went to the Townships… you drive from a beautiful city into a totally different world. The further you drive away from PE the more the houses turn from nicely build to small and made from whatever they could find. The first time you see it, you still don’t understand that there are really people living there and that’s because you can’t imagine it. I’m used to running water a kitchen with fridge and stove and even a nice garden, but when you see the townships you are just baffled how these people could live, they must be miserable I thought. I couldn’t have been more wrong, the people in the townships are living with so much less than I have and still the smile every day. The enjoy every little thing, you drive around and wave and they are so happy!

We went to the townships with Louise. We had to pick up 2 girls, Zandile and Yolanda. They were with their mother because they had vacation and now that was ending so they were going back to their Thamsanqa house. Louise told us a lot about the townships and how the houses worked. Most of the kids don’t see their parents anymore but some of them only visited during vacations or other holidays. It was weird to think you can only see your parent(s) in vacations, but you could see that the kids were happy to see their mom but also loved to go back to their house.

In the evening Louise and Tia came to dinner and it felt like one big family! We had a lovely dinner cooked by Daphne and Peter and we talked and laughed and just enjoyed the food. After this we made a planning for the week, we had Mandela Day on Tuesday, camp on Wednesday and Thursday and Friday we would go a weekend to Plett with Peter and Daphne and the other volunteers.

The camp was amazing. The kids were so happy to be there and they loved our presence! Also, the monkeys gave it a special twist. It was great to play and sing and dance the time away and even though it looked like we didn’t do anything everyone was having fun. We watched Annie and my heart melted when Sommi, who sat on my lap, started singing along. She told me she had only seen “Annie 2” but she loved this one too. These are the little moment you think about your family and the things you’ve had when you were young… you almost feel guilty but you know the only thing you can do is make these kids feel special in this moment!

When the camp was over and we were going back home we were already preparing for the next trip to Plett. The first stop was the Bungee jump! It was the most extreme thing I’ve ever done, it was a moment in which I felt so free and happy, not only because I was jumping from a bridge but I was jumping into a beautiful scenery. After being full of adrenaline and buying the pictures of the jump we headed to Tsitsikamma national Park. Another beautiful piece of the garden route even in winter. That evening Daphne and Peter cooked us a nice braai and we went to our “backpacker apartment”. The rest of the weekend we went to Monkey land and Jukani and we ate at the most expensive looking restaurant I’ve ever been called Zinzi with all the volunteers. To bring the weekend to a great end we drank some cocktails and just talked with everyone, it was nice! On Sunday evening, we were just back in PE on time to go to the church again and it still was fun.

The next week we did everything we wanted to do and more. We visited Tinktertots and the Under the Tree project, we saw the Thamsanqa house, we went grocery shopping with Larissa, we even went a day with Sarah doing social work. Every day was a new surprise because you don’t know what to expect. You can see the projects are good for the children the moment you get there, but also the teachers and house mothers are so lovely. They really help these children grow and learn and they make sure the volunteers are either involved or have something to do. Of course, not everything is always great but even the part I didn’t like as much were making new stories to tell and experiences I had.

Next to the projects of Tia and Louise we also visited the things Peter wanted to show us. We went with 4 volunteers to the “weggooibaby’s” as Peter called them. It was just in a normal house that was attached to another house with room for 6 babies’. We went to see them and they were all so cute, I just couldn’t believe someone would leave their kid somewhere but I also had seen so much in the last weeks that in some way I could understand.

We also went to Cheshire Home Cleary Park. This was for me a very shocking thing to see. These people were living, but not really. Not because they were disabled or sick but because they didn’t get the care they deserved. I don’t cry very fast but at the end I was sobbing, everyone was. These people were so great and they just don’t get the chance to be! The week after this we could go to “Happy Feet” for disabled children and some volunteers went to make a video about the stories of the people at chesia. I didn’t want to go with because I couldn’t take it to go again, I was really broken after one visit.

Our last weekend was a nice one, on Friday we went to the beach with all the volunteers who were still here and on Saturday we went on Safari. This has always been a dream of me so I was excited to go. We talked to Daphne and after long consideration we decide to go with Laura, Dide, Joanie and me to do the Eddo Elephant/Scotia safari. We were picked up at half pas 8 and drove about an hour to Eddo for the first half of the day. Eddo is a beautiful park, they have so much space for all the animals. We saw many elephants and buffalo’s and Zebra’s and a lot more. In the afternoon we went to Scotia, we started with a lunch and after that we went in an open land rover tot the Private reserve. We almost saw all of the big five, but we saw so much more. It was everything to see these colossal animals in the wild. The last Sunday we went to the market at the boardwalk in PE. It was nice, a lot of souvenirs you can find there. We ended with the church, this was the last time I would be there for a long time so I really wanted to go.

We would be leaving on Thursday so we visited the houses we really wanted to see for a nice goodbye and we taught the children of Tinkertots the Macarena for their big concert! It was nice to have a proper goodbye with the kids.

Unfortunately, that wasn’t even the hardest goodbye… We had a nice goodbye dinner at Daphne and Peter’s in combination with a baby shower for Noisi and a goodbye for Laura and Dide who would be leaving the next week. Everyone was there, Louise, Tia, Peter and Daphne all the other volunteers, Noisi. That was the moment we realised we had to leave soon. These people had been our family for the last three weeks… and as much as we want to come back we don’t know how long that could take. They all had a nice heartfelt speech about us and a card and a goodbye present…. And then we had to say something. I most of the time can make pretty good speech in English but I didn’t even get one word out before starting to tear up. After that it was a lot of hugging, sharing memories and just have a nice time.

It was truly and will for every be the trip of a lifetime. I know I’m going to go back someday, it may be next year I may be in 10 years but I will try to come back! It’s a thing I could stripe off my bucket list but now it’s made place for an even nicer one: Going back to South Africa to see my friends and help them wherever they need a volunteer! 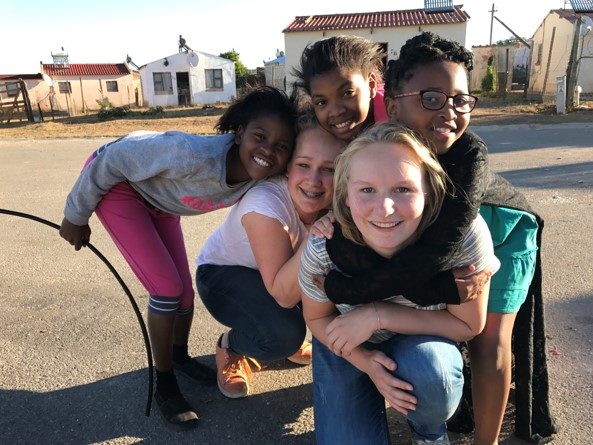